The Paintless Car Dent Puller Removal Tool Kit was designed to pull those nasty dents that ruin the fancy look of your car without needing professional care. Equipped with a special suction adhesive system, the dent puller removes the dent seamlessly by simply ‘pulling it out.’ Using our car dent puller requires no external chemicals or toxic materials; it’s as simple as attaching it onto the affected area and twisting the knob until the dent is gone. No type of additional damage is done to the car with this dent removal tool.

Best part of all, it’s extremely compact and lightweight. Make your car appear as good as new by getting rid of those annoying dents with the dent puller kit! Use enough glue to create a glue cushion of about 1-2 millimeters between the metal and the puller pad.
It’s fairly important to press it quickly to operation surface.
DO NOT let the glue harden completely. It will just break off when you pull the dent. As you pull the dent you should see the glue stretch slightly, and there will be a distinctive metal popping sound if you do it properly.
The timing for the glue set will also depend on temperature and humidity. Cool weather may take even less than 60 second

Used this product to pull out a dent on the driver's side door before returning my car coming off a lease. Worked like a charm! Highly recommend this product!

Purchase is satisfied with thank you to the seller. 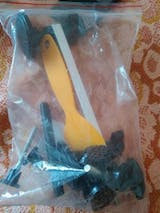 Thank you very much.Everything is fine! 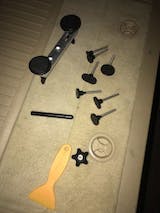 It worked! Added hot glue to the cup, put over the dent in my refrigerator and presto, no dent.

Everything that you would need to use is included in the kit. The instructions are detailed and easy to understand and follow.

Was hesitant about getting it but using it on a dent in my tailgate worked perfectly.

I have bought other ones like this but they were not made to last. This one is worth the money. Good product.

Worked like the one I bought years ago still works the same. Pulled a crease out of a washing machine.